What diseases are affected by epigenetics? 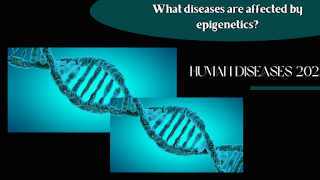 Human illnesses' genetic causes are being identified at an unprecedented rate. Changes in the epigenome or the amount and activity of proteins that govern chromatin shape are an increasing subclass of disease-causing mutations. The focus of this article is on research that has discovered human diseases caused by epigenetic dysregulation. Direct changes in epigenetic markers, such as  DNA methylation , have been identified to impact imprinted gene regulation and may cause disease. Disease-causing genetic alterations in epigenetic modifiers that change chromatin in Trans or have a cis effect on chromatin conformation are also described. Epigenetic modifications cause human illnesses such as Fragile X syndrome, Angelman's syndrome, Prader-Willi syndrome and some cancers. Your cells all have the same genes, yet they look and behave differently. Epigenetics helps define the function a cell will have as you grow and develop, such as whether it will become a heart cell, neuron cell
Post a Comment
Read more